These Kids are Bored… Part 2

You’re Not Really HEARING me!

Everything a kid tells you is important. You may not think it’s important, but to that kid, at that moment, it’s the most important thing in their world.

We as adults have, over time, developed a filter called: “THE STUFF IMPORTANT TO ME” filter. And we react accordingly. If someone tells you something that is interesting to YOU – YOU naturally react with genuine interest. YOU react with attention. YOU react because you actually care.

But when someone tells you something that you have no interest in, you may try to react as though you care – because you don’t really want to offend the person trying to tell you something. But you’re not really listening, are you?

How many times have you had one of these experiences to only usher that child to his seat and tell him politely that he can tell you later? After all, it’s time to start class, right.

To a child, you may be the most important person in their life that needs to know this information. Your reaction will determine their significance at that very moment in THEIR WORLD.

Are you really listening?

These Kids are Bored… Part 1

It starts from the moment they walk in…

You might have assumed that this whole series of posts was going to be about how to prep and present a better children’s church.  And guess what? Later, I am going to discuss that very thing… but, later.

Before you can start the 5 minute countdown, make a grandiose announcement, send in a crazy character, start your Bible on fire, or eat donuts suspended from a rope, we need some kids to come thru the doors.  If the kids don’t show up, you’d be starting your Bible on fire for, well… nobody.

But what can you do to keep kids from getting bored from the moment they come into your ministry area?

Engage them!  Here are a few suggestions:

Have I given you something to think about?  More later.

these kids are bored… it’s not their fault! 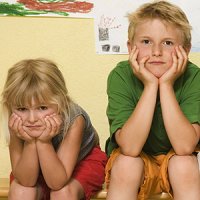 It’s just the world we live in.  Kids are sucked into media-crazed stupors that they are stuck in.  They have the luxury of playing any video game they want, watch any movie on-demand they can access and visit with kids all over the world.  And when they show-up at church, they’re being told that Jesus is a mighty savior… but he keeps falling off of the felt-board.

My question is: what do kids like that will engage them in what God’s Word says?

In this next blog series we will explore what kids like, don’t like and what we can do about it.

While I write some more, go pick up the little felt-Jesus off of the floor…