I was honored to be included in a podcast episode of the Kids Ministry Collective hosted by Tom Bump.

You can find out more about Tom Here. I got to give my honest thoughts about using visual, performance arts in KidMin settings. I joined the episode along with Jarred Massey – who is a dynamite Kids Pastor in Illinois – check out his site here

Get the Episode on iTunes

or, if you don’t uese iTunes… listen it Here:

I was honored to find out that JamieDoyle.com was featured… 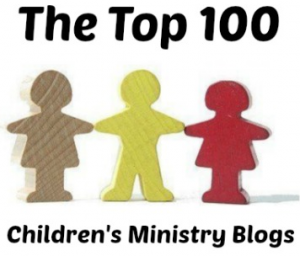 …at #61 of the Top 100 Children’sMinistry Blogs at ministry-to-children.com (an awesome site BTW) I’ve had the honor to be part of this list for the past few years.

Thanks to the site’s creator, Tony Kummer and to those of you out there that cast your vote

There’s a tool that was added to the list that I think is the best idea and a great resource to those in KidMin. It’s a custom google search engine to search the Top 100 Blogs in the list – and it works great!

GO HERE to check it out. I searched several of my favorite topics. My search on Volunteers pulled-up 100 posts within those blogs.

Do yourself a favor and bookmark this page!

I still believe that one of the best ways to minister to children is with the “Children’s Church” model.

During this series on Making Your Children’s Church Better, we will explore the little details that make a huge impact. Today, we’re talking “Transitions”.  In the last 7 months, our family has had the privilege of traveling the United States and observe the services for children in churches and at Kids Camps. We’ve seen the good the bad and the ugly when it comes to service planning and presentation… and the transitions stood out the most. So, here are few of my thoughts, tips, ideas and advice for keeping your Children’s Services moving along smoothly:

Know what you’re going to say before you start speaking

I love Music – it’s powerful and can be so useful in ministry. But like anything, it’s a tool that should enhance the message or segments that have already be prepared. Background music can be found in a variety of places. I personally don’t like using music with recorded lyrics as background music when teaching – I feel that it will detract from what’s being talked about. I also don’t like altar music that is popular worship music if I’m talking over the top – again, it can be distracting. I don’t mind using worship music with lyrics while children are praying during a prolonged prayer time.

Here’s how I use a background music for transitions and segments:

Kids live in a visual, digital age and using visuals is so important. There are many ways to use video clips as teaching tools, but this post is specifically about transitions. Again, I highly recommend the background music produced by Brian Dollar and High Voltage Kids.

You can find even more videos at WorshipHouseKids.com

Posted by Jamie Doyle on July 18, 2009
Posted in: Products and Resources by Others, updates. 3 comments
Share this Post

I wanted to say a special thanks you to kidology.org for re-posting my advertisement from this blog about our new CD – “the BIG spin”

I appreciate all that kidology.org has done over the years. If you are not a member, please get the membership – it’s really, my online file-cabinet/bookshelf/church supply closet of all things children’s ministry resources! The stuff there is submietted by CM leaders from all over the world and from every type of church setting. Go for it!
Share this Post