Are you subscribed to our Doyle Family Missions Newsletter?

If not, the latest one is filled with pics and reports of the ministry that took place at Churches, Kids Churches, Kids Camps and Missions Services all across the United States.

In addition, you will read about some new projects and my first upcoming International trip as a missionary and how you can get involved.

Afterwards, SUBSCRIBE so you can get the newsletter in your e-mail!

Getting Involved is Easier Than You Think!

You don’t have to be a high-Caliber Giver to get involved!

So if you were thinking that we were trying to tap you for that “$10,000-empty-your-life-savings-love-gift”… think again.

Although we appreciate the High-Caliber Givers, what it really takes is many individuals, families, churches, businesses and organizations giving Monthly Commitments that are actually do-able.

You can help us meet our goal for April (or any month for that matter). We are looking for individuals/families and churches to partner with us by making monthly commitments. Here’s how you can get involved:

We are grateful for any amount you are able to give! Pray – see what He says… then CLICK HERE and set it up.

(if you prefer a commitment form that you can mail of fax, add a comment here)

Kenya – A KidMin Trip To Remember! 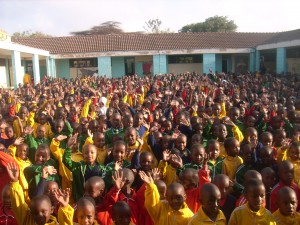 For those who were in the know, I spent 10 days in  Kenya (with a few days of travel on each end of the trip). I’ve been on several overseas missions trips… but this one had an impact on my life that I won’t soon forget.

During our time there, we ministered in several schools. One school was over 2000 kids. The other 1500 and the smaller ones with 400. It was heart touching to see so many of those kids give their hearts to God. In one of the primary schools, our ministry team watched as four Muslim girls sat together near the front on the dirty concrete ground. When the salvation invitation was given, three of the Muslim girls sat with their arms crossed. But one of the four looked at her three Muslim friends, looked back toward the front and raised her hand. We watched as she prayed, along with hundreds of other kids, and asked Jesus into her life. She made a bold step… a bold step that has changed her life forever. The Head Master, or as we say, the principal, saw what she did and went and talked to her after the program. He is a strong believer himself. He confirmed that she would be disciplined if her parents were to ever find out.

Unlike public schools in the US, these schools not only allowed us to present a salvation message with an invitation for salvation, but they also helped us promote the outreach event we did in the evenings by inviting the school children to attend.  At those evening outreaches, we saw hundreds of kids attend and hundreds of kids respond to salvation!

I also had the privilege of ministering in one of the local children’s churches on the Sunday before I left the country – it was an amazing time. Many of the children from the school assemblies and the evening outreaches attended and we squeezed over 500 kids into a space made for 300 kids! Again, we saw many come to the Lord.

As I type this, I am also praying for the children and Children’s Ministry Leaders in Kenya – it is a place hungry for effective ministry to children.